The pattern of LAS consumption demonstrates the overwhelming preference by consumers for liquid laundry detergents in North America, whereas powders continue to be the dominant products in Western Europe, Japan, and China. Comparable and reliable data in other world regions are generally unavailable. In these less-developed world areas, LAS is essentially used only in laundry powders (particularly in India and Indonesia) and hand dishwashing liquids. The latter are often used as general-purpose cleaners. 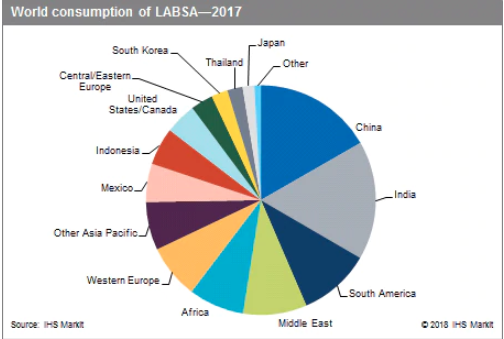 About 82–87% of LAS is used in household detergents, including laundry powders, laundry liquids, dishwashing liquids, and other household cleaners. Industrial, institutional, and commercial cleaners account for most of the other applications, but LAS is also used as an emulsifier (e.g., for agricultural herbicides and in emulsion polymerization) and as a wetting agent. Very small volumes are also used in personal care applications. Demand in the North American household segment fell sharply in 2000–11, as a result of several developments, including reformulations away from LAS to alternative surfactants because of cost considerations, the greater use of enzymes, and adverse economic conditions that resulted in lower overall surfactant levels in detergents. However, consumption stabilized during 2011–17.

Although consumption of LAS will likely stabilize or decline slightly in the highly developed regions, it will increase by 3.0–5.0% in some less-developed regions or countries, such as the Middle East, Africa, India, and China, as well as Southeast Asia. As a result of the rapid growth of LAS demand in the Asia Pacific region, demand in the region accounted for over half of global demand in 2017.

The worldwide growth of LAS will be negatively impacted by the efforts of detergent manufacturers to reduce the active content in their surfactant formulations, by the shift to liquid detergents in some countries (which benefits competing surfactants), and by less consumer overdosing (particularly in North America with unit dose laundry products, assuming they continue to take some market share from traditional liquid detergents). However, consumption of LAS will be positively affected in countries/regions such as India, China, Africa, and the Middle East, where powder detergents are still a very large part of the laundry detergent market.

Linear alkylbenzene sulfonate competes with several other major surfactants for use in household detergents. Some of the competitive surfactants have greater hard-water tolerance and better compatibility with enzymes and are milder than LAS. Historically, however, LAS has most often been lower in cost and has had other more favorable properties compared with competing surfactants. During 2002–06, very high crude oil prices made LAS far less competitive than had been true in most years since its introduction. During 2007–11, LAS prices tracked more closely those of the competitive surfactants. This led to a more stable pattern of consumption, even as prices for all surfactants continued to be very volatile. From late 2014 through 2017, low crude oil prices helped LAS become more competitive.

LABSA/LAS production is impacted by the supply situation for competing products—mainly alcohol ether sulfates (AES). Shortages in AES supply or its high price has usually favored the use of LABSA/LAS. In the developing world, LAS competes with soaps. 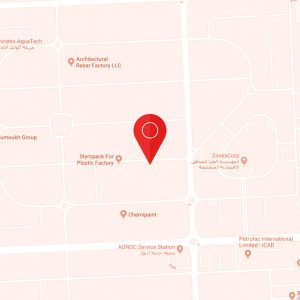 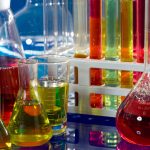 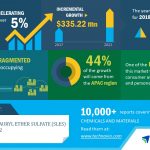